This post is part of a series about Designing the Obvious, a book about common sense Web application design. Learn more about this series.

When you cut your finger, you put a band-aid on. It doesn’t fix the cut, but it hides your wound from the world. In the face of an interface problem, the natural reaction is to place the equivalent of a band-aid over it. Too often, this doesn’t do much to change the underlying problem.

For example, here is my least favorite thing about MySpace: 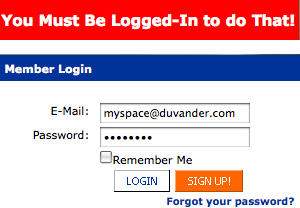 Whenever a user clicks something that requires a login, MySpace redirects to the home page for authentication. This probably confused some users, naturally, because nothing was guiding them along. So, MySpace’s solution is to include a big red box with an exclamatory message that feels like a hand slap.

“I don’t like band-aids. Instead of putting band-aids on problems, I perform surgery on them. Interface surgery.”

The book has several examples of interface surgery, where the author solves a problem by improving it a bit at a time. You may not agree with all the steps, but it is a joy to watch something become less broken.

But I have a problem, one I hope you can help me solve. Band-aids are often the simplest solution to a problem. As someone who loves simplicity, how can I advocate the additional time to get a better solution? Is it that extra work on my part makes it simpler for everyone else?