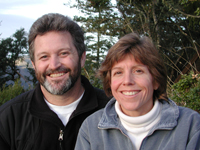 That’s the case for Ken Anderson and Janice Flint, husband and wife owners of Crystal Springs Software. Ken left his job at Adobe after 21 years to found the company, which makes iPhone apps. Its first product is an addictive little game called iZilch. 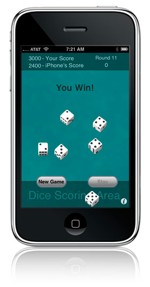 I’m sure Ken and Janice have many great iPhone app ideas, but they started with a simple dice game. The rules are straight-forward, so there weren’t a whole bunch of features to add before they were able to launch. They focused instead on finding the core. Although, Ken says it’s not quite as easy as it looks:

“Since it is a dice game, we focused the user experience on the dice and how you interact with them.  You drag the dice with your fingers to score.  You roll them by shaking the iPhone… All this results in a very transparent user experience, a game that sweeps you up and moves you along… It is actually a lot more work to design software this way, though the scope of this project is still small.”

Ken and Janice chose to focus on creating a few polished features instead of a whole bunch of fluff that doesn’t flow. Even better, they were able to get their first app out in just a few months. That’s counting the time it took Janice to learn the platform.

All the while they were creating the simple life they wanted while raising their four teenage daughters. Their primary goal was not to cash in on the riches of the iPhone platform. The objective was a lifestyle change. Ken says he misses some parts about working for Adobe, like having hundreds of people focused on the same goal. But, they’re enjoying their work, even if it is a little different:

“As an Indie developer, you have to do everything yourself, and you can’t do all of the traditional things that a big company does to make a product successful because you don’t have the resources.  Hopefully, we will be able to hang in there, build great products, figure out how to let people know about them and grow a sustainable business on our own terms, but it will take some time, and like iZilch, some luck.”

My friends at Wired are on their side. Chris Anderson wrote a cover story this month about The New New Economy, where there are more companies, each with fewer people. An old BestPlaces joke was that we only had a handful of people because in big companies, there are only a few people who really work.

In Crystal Springs Software we see two people choosing a simpler life and creating simple software. If this is the future, we’re doing pretty good.