I’m not much of a fisherman, but I go out with my friend Steve every couple years. We usually walk along the river, looking for the bends, where the water gets calm. The first couple spots are usually taken by others casting their flies. The next couple of spots Steve often walks right by, because they’ve likely been fished by others too lazy to hike in a little farther. 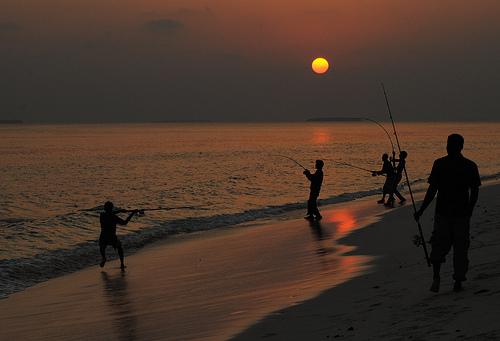 Even if you don’t fish, this likely makes some sense to you. As a Portlander who likes breakfast, I know going to a less crowded restaurant gives me a greater chance of having a seat for my salmon hash.

Another story of a fisherman takes a less obvious approach to choosing the less popular spots. It’s not about where you get the fish, but what you do with it afterward:

After his first few hauls of fish, John did something quite significant. He bucked an industry trend that had lasted for decades. Instead of doing what all the other fishermen did, which was to sell his fish to a distributor, John went direct to the biggest fish buyers in town: the tourist-packed seafood restaurants on the Cape’s famous Atlantic Seaboard.

After knocking on a few doors, John quickly realized that the restaurant owners were only too pleased to hear from him. After 50 years of being at the mercy of the centralized resellers, John’s service – fresh fish, straight off the boat – was exactly what they’d been waiting for.

I love this story, Fresh Fish, from the eBook Do Ideas. It simply questions an assumption that all other fishermen are making.

What’s the equivalent of the distributor for you in this story? What if that were not as important as you think?