In the vein of Steal This Idea come a couple of sites that actually executed.

One, BuildV1 wants to connect like-minded people to work on projects together. Maybe at first they would build something simple together. Once they know each other, maybe they will work on something bigger.

Rather than focusing on ideas, BuildV1 separates the site into two lists: entrepreneurs who need help and people who want to help entrepreneurs. 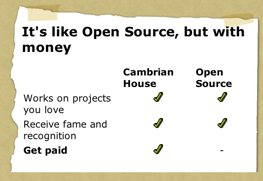 By contrast to that laissez faire approach, Cambrian House is about giving ideas to crowds and letting them run with it… or tear it apart. If an idea makes it past the first round (called “Idea Warz”), then people get together and make it. Finally, Cambria House markets the product, paying out profits to the idea guy and the others that helped make it. This animation explains it pretty well.

Cambrian House values ideas at five to ten percent of the whole project. That might be high, but I like seeing it in terms of a percentage instead of the idea multiplier.

Thanks to Amit for showing me BuildV1 and Ryan for pointing me toward Cambria House.