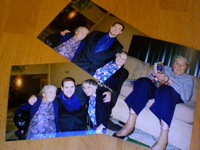 It wasn’t really until I got the call from my sister that I stopped to think of the impact. From preschool through junior high, I spent every afternoon with grandma “Haha.” Unlike with my parents, I can’t point to the obvious ways she influenced my life, but the sheer volume of hours speaks for itself.

She died last Wednesday, two weeks shy of her ninety-first birthday. Or, as she would call it, “pushing one hundred.”

The local paper has a nice obit that includes a classic quote from my uncle Jim. Gradma would not have cared that the paper’s Web site doesn’t include anchored links that would let me point to the exact spot on the page. Not only was she not up on this internet stuff, but she was all about putting others before her. She would have graciously taken second billing to J. Hayes Hunter.

My cousin created the nick-name Haha, after grandma’s laugh, which included a full backwards neck-tilt for an exaggerated, perfect guffaw. It seemed appropriate, then, through the tears at the memorial, there were plenty of laughs.