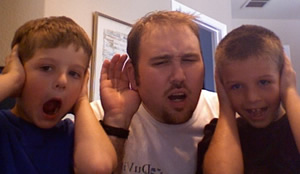 We all know that many things change as we age. I just never figured my hearing would go so soon.

There is a “mosquito ringtone” that teens are using on their cell phones because the teachers can’t hear it. Apparently, the ear changes at about eighteen. So, high schoolers can text message each other during class and the powers that be are none the wiser.

It seems impossible, but the New York Times (free reg req) had a piece on it, and CBS News has a good overview, as well as a link to the sound.

If I get really close to the speakers of my laptop, I can barely hear something. The high-pitch sound is almost drowned by the sound of the computer itself. Since I’m watching my nephews (ages six and eight) this week, I thought I’d see how well they can hear it. They have no trouble, many feet away from the computer, even.

I recorded our interaction as I played it for them. Fascinating:

Update: October, 2018
Sadly, the original recording of my nephews is lost along with all my other Odeo recordings. But, 12 years later, I now have kids of my own. My daughter (nearly six) came into the office recently and we did our own hearing test.

This one ramps up from sounds almost anyone should be able to hear to that special frequency that is just for kids. Unlike when I was in my 20s, I can’t hear it no matter how close I get to my computer.