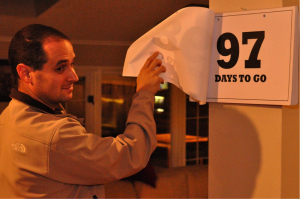 I’m a fan of time-boxing techniques for creating constraints that encourage me to get things done. The POWER HOUR, for example, has been in my arsenal since 2005, though I don’t use it every day. That’s great for personal productivity, but what about when it comes to motivating toward the same end?

Jason Freedman shared the 100 day goals that have kept his company moving without burning out the team:

“Setting deadlines first and then choosing ambitious goals is the key.  The deadline becomes a forcing function that wipes away distractions.  There’s simply no time for extraneous features.  Failed experiments end much earlier.  Hacked together solutions get tested much faster because there’s no time to build the scalable version.”

Now I’m going to try something similar, but with my growing developer relations team at Orchestrate. This week we’ll be on an all-company retreat, where among the outcomes I want is a plan for the next 100 days. Using Freedman’s approach the deadline comes first. Whatever the developer relations team will accomplish during this timeframe will happen by September 9.

Determining what fits into those 100 days is the hard part. And we’ll be using some of those precious days to figure it out, likely walking back and forth on the two simplicity paths until we find the right balance.

As Freedman suggests: be ambitious, but do away with wouldn’t-it-be-cool-ifs. Then we’ll start again.