There’s a saying that says “there’s a fine line between love and hate.” Similarly, when I run my hand under ice cold water, it sometimes feels hot. Opposites are not as different as it might seem.

I’ve struggled to see how simplicity and complexity were similar. They need each other, but they still feel like extremes on a continuum, far more different than same. 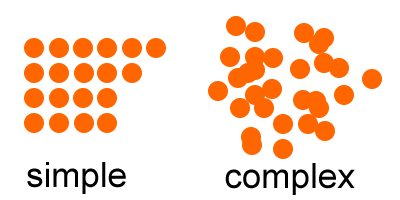 One thing that simplicity and complexity have in common is that they each can be both positive and negative. How you view it depends on your perspective and the context.

The reason I had not seen the similarities before was that I had been comparing a positive interpretation of simplicity to the negative version of complexity. When viewed from the same perspective, there is a lot more in common.

In the positive sense, both simplicity and complexity provide a surprise that impresses people. The negative versions are merely frustrating.