My dad is a technician. With a degree in mechanical engineering, he knows his nuts and bolts. So, he devised a puzzle that fooled fellow technicians, but was solvable by those blissfully ignorant of his mechanical ways. The solution required someone to not think like a technician. 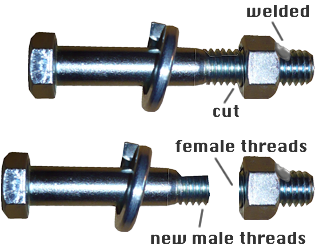 Dad put a split washer on a bolt, and topped it off with a nut. Then, he welded the bolt to the nut. It doesn’t take much of a weld to keep the bolt stationary. The object of the puzzle is to remove the washer, which appears impossible, and it would be if not for the next step.

Dad cut the nut and the part of the bolt it is connected to from the rest of the bolt. Using a threading tool, he created a new connection point, so that his nut/bolt piece was together the new end cap. Removing the washer from this puzzle is as easy as turning the bolt, just as when there is no immovable weld.

Here’s Dad’s story of one particular technician who tried to solve his puzzle:

“Mom took one to school and just tossed it onto the principal’s desk, saying that the object was to get the washer off. She came back much later and he disgustedly gave it back to her unsolved. She handed it to a woman collegue, perhaps his secretary, with the same directions. She just barely looked at it, gave it a twist and off it came.

The moral of the story, as we used to tell it, was that the man’s experience with how unmovable anything that has been welded is, welded his mind shut too. He was so sure that the weld could not be broken that he didn’t even try. Whereas the woman, who had no such welding experience, her mind still open to the fact that anything with a nut on it must turn, simply turned it and it opened.”