10 years ago I stared at an empty OpenOffice document. The cursor blinked expectantly.

It was early January, 2009, I had inked a book deal, and was frozen. My proposal included a complete outline, so it’s not like I didn’t know what to write.

There’s some comfort in an empty document, the italicized Untitled filename can still become anything. With a blank slate, there is only possibility.

I rationalized that maybe I shouldn’t start with chapter one. It’s like a persuasive essay where you write the introduction last so you can foreshadow the argument you’ve already made. That makes a lot less sense for a programming cookbook, but I moved on to chapter two.

It didn’t get easier. All I could think about was how permanent the words would be, printed into 5,000 copies. Nevermind that it would be 18 months later and that I’d have at least five opportunities to change every word, sentence, and code sample.

I felt the pressure of the possibility.

Possibilities are Endless with a Blank Slate

Fresh starts are nice. Despite the pressures of writer’s block, the truth was the blinking cursor was all possibility. As I write this, it’s the first week of 2019. A new year. Resolutions abound as people optimistically look out at the possibility of a blank slate.

There is potential energy stored up in anything new: freshly fallen snow, a beautiful wedding cake, or electronics straight from their packaging, that static plastic film still covering the screen. Unfortunately, none of those things fulfill their purpose left in their pristine state. The electronics should be used, the wedding cake should be cut (and eaten!) and that snow should be trod upon by hefty winter boots.

Most new things are concepts rather than physical things. Semesters in school—then quarters in business—each bring new possibilities. Monday is the start of a new week and every single day (so far) the sun rises. Even a washed car and full tank of gas hold inspiring potential.

You don’t need to wait for some milestone (like January 1), you can make your own newness. My friend Mike Vardy advocates starting the new year whenever you want. Because of his influence, I’m 12 weeks into training for a 5K rather than starting with the calendar year.

Here’s where the internal dialogue starts: I’ve written the section above, but this one is empty. That’s a lot of pressure. I’m happy with this post so far. What if I screw it up? But if I never write anything, the post will never be finished.

Some people spend years in the state of possibility. It’s like the old calculation of an idea’s value. The execution is what’s valuable and the idea is a multiplier. The idea is the possibility, and it’s much more comfortable than taking action. When you execute, you might find it’s harder than you thought, and you might feel the pressure of a reality mismatched with the fiction of possibility.

It was almost three years ago that I decided I should be a runner. I knew there were programs that started slowly with a mix of running and walking. Putting shoes to pavement is the ultimate reality check. It was much easier to imagine having done it than to do it. Two years passed. On my birthday in 2018, I created an event page for the following year, but never published it. Finally, six months later, I laced up my shoes and ran a couple blocks.

When you start turning the possibility into reality, the pressure should decrease. The build up of potential energy is translated into action. At the same time, and this can be hard, the possibility also decreases. This thing you’re doing is becoming real. It may not match what you imagined. But your working on it is the only thing that fulfills its potential.

For me, after awhile of taking action on the newness, once it stops feeling new, another blank slate appears in my mind. It’s the one that imagines that others will really love it or really hate it. It’s a cycle and it includes new possibilities, which means new pressures. And the only way around that is more action: launching, sharing, or whatever it is that will move that reaction from possibility to reality.

Will You Ever Write Another Book?

This post started as a way to commemorate the 10 year anniversary of a huge project about which I’m proud. Even if technology, as it inevitably would, has made my book a bit outdated, I can always say I wrote the book on map scripting (primarily because that’s a term I made up!).

When that 18 month process came to a close with the book’s publication in 2010, I was often asked whether I’d write another book. At the time I expressed uncertainty. There’s a lot to gain from writing one book (it’s the reason for my current career path), but the jump to two-time author is seemingly less impactful. 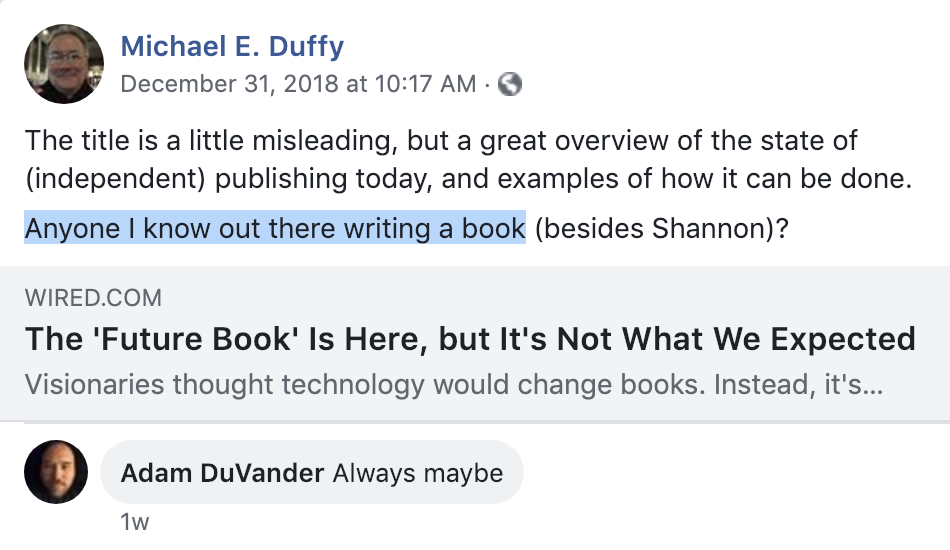 It’s been awhile since someone asked me, but my ol’ blog buddy Mike Duffy posted on Facebook and I found myself responding: “Always maybe.”

If I wrote another book, I’d definitely remember what I learned last time: write it in the margins of work and focus on progress every day. But I’d also look to share more sooner, to tighten that possibility and pressure cycle.

Recently I came across Kelly Miller’s 30 day book project. From October 1 to November 1, Kelly moved the project forward, from outlining, to writing, to editing. And she has an epic Twitter thread where she checked in every day with progress.

Regardless of whether it’s writing a book, I think we can all learn from that approach to the projects that matter to us. As the possibility turns to pressure, remember that forward progress both relieves the pressure and brings your efforts into reality.