Six grocery stories in Portland have confirmed what I assumed was true: they only sell egg nog during the U.S. holiday seasons of November and December. Finding this out became one of the more outlandish tasks I’ve given to Fancy Hands, a virtual assistant service I have been using this year to simplify my life. It started with a conversation over egg nog–probably spiked with rum–over the holidays. Sipping the thick, sweet, milkish liquid, I wondered whether I could get it in a decidedly non-holiday month. So, I quickly added a task to Hiveminder and set a due date far in the future.

When it popped up in my todo list, I laughed aloud, thinking back to my silly December self, the only one in the house slurping down this beverage with an acquired taste. I didn’t want to let December-me down, but August-me had plenty of work to do. That’s when I gave the task to Fancy Hands. 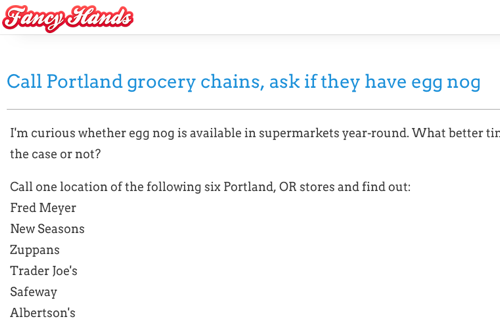 Sure, I could have called one store and probably had the answer I needed. But I decided to know for sure I needed a mix of specialty grocery stores and larger supermarkets. And it took me less time to write out the instructions than it would have to make even one of the calls.

I pay $45 per month for 15 tasks. So, yes, it cost me $3 to find out that I’ll have to wait several months to buy egg nog. And given what I know about myself, I might have spent awhile making those calls myself (at least seven minutes, according to Fancy’s log). Even worse, what additional time sink did I avoid by not even starting the research, which easily could have ended with me reading up on the history of egg nog or looking for specialty online retailers who could overnight me a quart any time of the year.

It’s a struggle, but my goal is to use Fancy Hands anytime I open a new browser tab and begin typing a search query. That said, my most common task this year has not involved research. I have used Fancy Hands about twenty times this year to schedule (or reschedule) doctor and other appointments. Those are the sorts of things that stay on my todo list for multiple days. The best part about that type of task is that it’s free. Anything that ends up on a calendar does not count against my monthly tasks.

The assistants are U.S.-based and often offer suggestions beyond the task. When I was looking for some temporary housing, the assistant let me know about her favorite neighborhoods from her experience in the city. And when my task to find egg nog in August came up empty at all six grocery stores, the assistant linked to this video (embedded above) that teaches me how to make my own egg nog.

Now if only Fancy Hands would come to my house and clean it for me. (Oh, there’s a service for that, too).